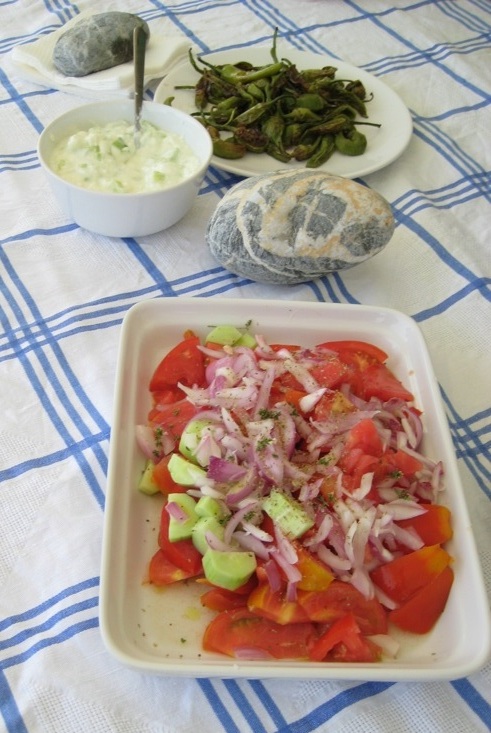 A Greek salad as served at one of the many tavernas on Skiathos.

Skiathos provides plenty of opportunities to eat out as there is a huge range of beach bars, restaurants and the ever ubiquitous taverna all available accross the southern coast of the island. The greatest concentration of eateries is to be found in Skiathos Town.

Until a few years ago there was a McDonald's restaurant in Skiathos Town, though this has now closed. The remaining restaurants range from the simple to the extravagant and between them cater for most tastes and all budgets.

Several businessmen from Athens have invested in restaurants in Skiathos Town and consequently there are many plush new restaurants to choose from, though eating experiences in these newer establishments can vay from mediocre to suberb. As the saying goes: You pay your money and you take your choice...

One of the more popular restaurants in Skiathos can be found at the top of the hill in Skiathos Town: The Windmill restaurant. Here you can enjoy magnificent views over Skiathos Town and the harbour whilst feasting on the chef's culinary delights.

Local produce, such as fish, olives, figs, and honey all feature prominently on the menus along with traditional Greek favourites such as Feta cheese.

For the less adventurous, most restaurants and tavernas offer a range of meals that are more familiar to northern European tastes.

Dishes of note include fresh fish, locally caught and simply cooked as well as Moussaka. This is traditional Greek favourite made from aubergines, minced lamb, and a béchamel sauce.

A convenient option for those wanting to sample the traditional foods of Greece is to order Mezedes. This is the Greek equivalent of the Spanish tapas and is basically a platter of bite-sized fish, meat and vegetable dishes.

As the island has several vineyards, local wine is also widely available alongside wines from other parts of the world. A good range of European bottled beer, as well as the usual range of spirits, is typically on offer at most restaurants and tavernas.

Many establishments will serve Ouzo after a meal. This is a fiery, anise flavoured spirit that will certainly put hairs on your chest!

For those preferring to cater for themselves whilst on Skiathos, there are mini-markets available in most of the resorts along the south coast of Skiathos.

These carry a good range of basic grocery, bakery and off-license supplies. Skiathos Town has the best selection of supplies as local providers sell a range of groceries from meat, fruit and vegetables and local delicacies. Bottled water is widely available.